Toma Kikuchi (菊池 冬馬, Kikuchi Tōma) is a boy in Futaba's year, making his first appearance later in the story.[1] He is a 2nd year High School student and was previously going out with Futaba Yoshioka.

Toma has a very "boyish" face for his age, in other words he doesn't look very masculine. He has short orange hair with bangs that cover his eye brows (he has soft features and kind looking brown eyes). On his right ear, he has an ear gauge. What also minimizes Touma's masculinity is the fact that he blushes a lot.

Touma is a very kind hearted person. Despite his appearance, Touma is just like any other guy in the sense that he is in fact very masculine. He can be shy at times, which exacerbates his heavy blushing, yet he changes when he is in front of a mic singing. Like anyone else, Touma can get upset (especially at Kou Mabuchi), but his best quality is the ability to speak his mind and his honesty.

He initially has a very bad impression of Futaba, during which she trips and ends up accidentally groping on him. However, he eventually softens up to her when he notices how remorseful she feels about the incident. Due to his earnest appearance, his intentions after often misunderstood, usually causing Kou to get jealous over his interaction with Futaba. His friends call him "Goodie-goodie" and "Hasabe" due to his strait-laced and honest behavior. He falls for Futaba's good nature and finds himself wishing that she would shift her affections onto him. Despite this he constantly supports her and gives her confidence.

Touma's first impression of Yoshioka wasn't great, considering she dropped on top of him. Touma's view on her changed after he realized that she was bothered by the way they met. After clearing up their misunderstanding, he ends up having a liking towards her. Touma tries his hardest to occupy Yoshioka from Kou and invite her to his band rehearsals (just as an excuse to hang out with her). The more he spent time with Yoshioka, the more his feelings for her grew, but he was always defeated by Yoshioka's interest in Kou. After Yoshioka's rejection by Kou,  Touma confesses to her, and tells her that they are finally facing each other. Little by little he is showing more things about himself to Yoshioka, in order to steal her away from Kou. In recent chapters, Touma has become more bold (to the sense of asking Yoshioka out on a date). During the date, Yoshioka begins to cry which provokes Touma to hold her hand and hug her. In result of such events, they begin to date which only resulted in them breaking up later on after Yoshioka comes to terms that she will never love anyone else but Kou. Due to his kindhearted personality and genuine love for Yoshioka, he still wishes for her happiness (despite the fact that it won't be because of him).

Upon first meeting Kou, Touma didn't have any opinion of him. He later gets annoyed by Kou always being around Yoshioka and how Kou won't choose between her and Narumi. Touma wants the best for Yoshioka and wants his feelings to get through to her, the fact that Touma believes Kou is toying with Yoshioka's feelings (which Kou isn't) by also having Narumi on the side, allows Touma to believe that Kou doesn't deserve Yoshioka.

Uchimiya is one of the two friends Touma is always hanging around with. Uchimiya seems to be a little closer with Touma then Tachibana (in the sense, that Touma invites him to his date with Yoshioka and how Uchimiya stood up for Touma when talking to Yuuri).

Kiyun is another one of Touma's good friends that is seen hanging around him and Uchimiya. Tachibana is more of the hyper one between the three them.

(to Futaba) "The confident Yoshioka-san and the timid Yoshioka-san going back and forth, but each time in your own special way, you attempt to make progress. That's the Yoshioka-san I like." [2]

(to Tachibana) "Ah, but, if Mabuchi makes Yoshioka-san sad again, maybe i'll turn my light on again too." 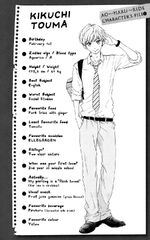 Retrieved from "https://ao-haru-ride.fandom.com/wiki/Toma_Kikuchi?oldid=7761"
Community content is available under CC-BY-SA unless otherwise noted.